I've been tilling the garden for an older couple for several years. When I went over to till this Spring, she asked me if I'd be willing to do a couple of side jobs for them. They have a couple of dead trees they'd like cleaned up and they needed a bunch of stuff hauled to the dum...uh...I mean, transfer station.

I said I'd be happy to do that and went over today with my tractor with the forks and grapple on it as I knew some of the stuff that needed to go away was pretty big and heavy. Loaded up my 18 foot trailer with an 80 gallon cast iron water heater, an old dryer, doors, windows, bed frames, scrap metal and junk.

Then she said "There's some stuff out behind the shed that needs to go too." A Cub Cadet 33" walk behind mower with a dead engine, a BCS tiller likewise, a couple of propane tanks and the remnants of a couple wheel barrows.

Got all that stuff loaded which involved several trips past this: 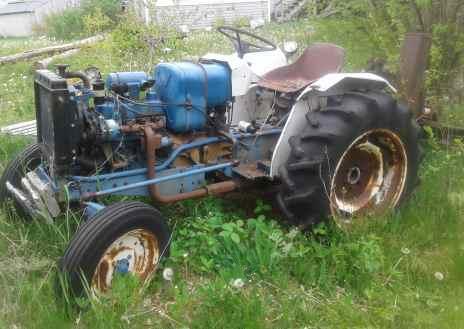 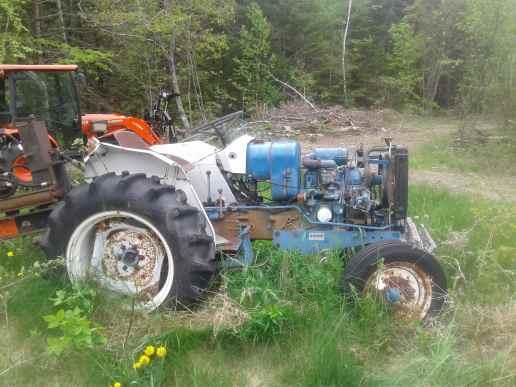 Being a tractor junkie AND a packrat, I asked her about it. "Hasn't run in years, don't know what we're going to do with it."

I thought about it for a minute and said "I don't wish to offend anyone with a lowball offer, but I'd be willing to swap my labor, including the tree work, for that tractor."

She conferred with her husband and he agreed, so after I took the first load to the transfer station, I went back and got it. Satoh with a 4 cylinder Mitsubishi gas engine. Not running, missing the distributor (probably in one or another of the sheds around the place) but the engine is loose and the oil looks good. I may or may not be able to get it running but even if not, the rear tires and rims are worth at least what I was planning on charging them.

There's a 3PH log splitter on the back with it's own Prince PTO pump. That all looks good, I think some fresh oil and new hoses and it'll be fine. Pump alone is ~$800 new, it's the same one that was on my old backhoe.

I'll put the tiller and the mower on Craigslist as is and see if anyone bites.
Top

What model is the BCS? Asking for a friend.

Not sure, I'll have to see if there's a tag somewhere. I'll get back to you in the morning.
Top

It's a 720. I got the dead engine off it today and it's a common 1" straight shaft so most any 8 HP horizontal engine will fit.

Grandson decided he wants it.
Top

Great, I think he’ll like it. EarthTools in Kentucky is the go to place for parts knowledge and accessories
Top

Did you find the hood and grill anywhere. I learned something today. I had not heard of that brand of tractor. Japanese made?

Satoh was the original company, bought out by Mitsubishi by the time this one was made. Lots of Mitsu parts.

Pulled the wiring harness out of it today. Wires all look good, but the plastic connector housings have mostly disintegrated. Found sources for new housings and from years of dubbing with motorcycle wiring have all the tools and stuff to assemble new connectors.

Got a new voltage regulator and new alternator coming. Connectors, Alternator, Regulator and Carb Kit total about $170 which I think is pretty reasonable. Little surprised to find them still available.

Distributor continues to elude me. If I can't find a distributor, I'm screwed and I'll have to part it out. Early days tho, I'm sure there's one out there somewhere. I may puke when I see the price tag, but we'll hold a Good Thought.
Top

Robert's Tractor out of Ohio put it on their locator service and emailed me this morning saying they found one.

Bit more than I'd hoped to pay, but less than I was willing to in a pinch.

The wee beastie could conceivably be running in a week or so!
Top

Good deal.....Always good when a tractor avoids the junk yard or scrapper.....On a side note, how is Guido getting along?
Bill Willett
West Central Ohio
What if the Hokey Pokey IS what it is all about?
Top

Guido's fine. One of the better purchases I've ever made. Always starts, sips fuel like a spinster with a teacup.

Distributor for Sadie the Satoh came in today and it's even the right one AND nice and tight!
Top
Post Reply
14 posts